During the annual members meeting at the landmark St. Helena Branch Library, the Friends of Fort Fremont premiered the documentary, “Fort Fremont: The Last Bastion in the Defense of Port Royal Sound 1898 – 1912.” This is the untold story of our local historic landmark and Beaufort’s role in the Spanish-American War.

Interestingly enough, the film also provides brief insight into the US Civil War and the role that St. Helena and Hilton Head Islands played in it.   This allowed the Gullah Statesman Robert Smalls to be mentioned within the context of how the naval operations came to be located in Beaufort County, SC in the Gullah/Geechee Nation.  Unfortunately, the Gullah/Geechee men that ultimately built the fort were not mentioned in this initial film which will enhance the visitor experience prior to tours of Fort Fremont which is located on historic St. Helena Island, SC.  The Friends of Fort Fremont begin a monthly tour of the site from the St. Helena Branch Library on the final Saturday of each month at 10:30 am.

The Friends of Fort Fremont have raised thousands of dollars which will be used to create an interpretive center at the Fort Fremont site.   They have received a number of approvals for this and have the support of the county to proceed.   So, they continue to seek members and volunteers that will assist with site maintenance and enhancement and with handling the visitors that will be coming to learn of this part of the history of the Gullah/Geechee Nation‘s coast.  For those that would like to be a part of the battalion of historians that are continuing to fight for Fort Fremont, attending the tour and/or one of the coming film showings is a great starting point. 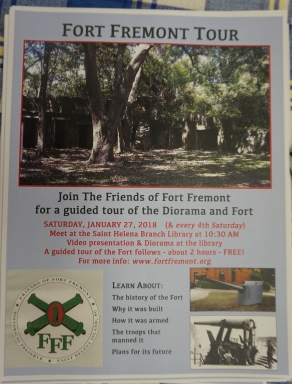 As one of the people that fought to keep the property of Fort Fremont from being a site for a planned unit development (PUD), it is wonderful to see the progress that has been made by people coming together to fight for this part of St. Helena Island’s history.   I salute the Friends of Fort Fremont for the outstanding effort!

by Queen Quet, Chieftess of the Gullah/Geechee Nation (www.QueenQuet.com) 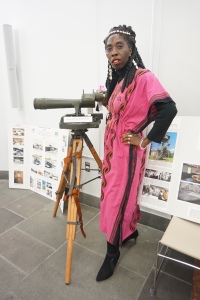 Queen Quet, Chieftess of the Gullah/Geechee Nation (www.QueenQuet.com) is the first Gullah/Geechee to become a member of the Friends of Fort Fremont.  She was one of the Beaufort County historians that initially fought to have the Beaufort County Rural and Critical Lands Board purchase the site to prevent it from destructionment.  That board and the Beaufort County Open Land Trust purchased the property to keep it public in perpetuity.  The Friends of Fort Fremont have since provided kiosk and brochures so that visitors will understand the history of the site beyond the historic markers that sit outside the fence as they proceed inside.

The organization accepts membership dues and donations at www.FortFremont.org.