Thousands of us came together along the Atlantic Coast in order to insure that the United States government heard a resounding NO to oil exploration and oil drilling in the Atlantic Ocean. The Gullah/Geechee Nation‘s leaders stood with more than 1,200 local, state and federal officials, more than 150 municipalities throughout the United States.   As a result of this, US President Barak Obama removed the coast from oil leasing.  However, the current administration has announced reversing that decision which would cause irreparable harm to the Gullah/Geechee Nation.

We know we can stop this AGAIN with your help.  Starting Monday, January 8, 2018 you have 60 days to formally oppose the plan.

After an extensive public input process, the sale that was proposed in the Draft Proposed Program in the Mid- and South Atlantic area has been removed from the program.  Many factors were considered in the decision to remove this sale from the 2017-2022 program including: significant potential conflicts with other ocean uses such as the Department of Defense and commercial interests; current market dynamics; limited infrastructure; and opposition from many coastal communities.

After receiving and evaluating the comments, added Sally Jewell, Secretary of the U.S. Department of Interior stated:

“We heard from many corners that now is not the time to offer oil and gas leasing off the Atlantic coast.  When you factor in conflicts with national defense, economic activities such as fishing and tourism, and opposition from many local communities, it simply doesn’t make sense to move forward with any lease sales in the coming five years.”

In spite of all of the coastal opposition that is already on record against seismic gun testing and oil exploration and drilling, the plan being put forth by the current administration in Washington, DC enables private companies to begin drilling in the Atlantic as early as 2019. Seismic gun testing would begin much sooner than that and will begin to affect the creatures in our waterways and that will have impacts on our fisheries.  There is no guarantee that oil exist along the Gullah/Geechee Nation‘s coast, but seismic guns would be used to check for a resource that could then cause major harm if oil was drilled for and began to spill along our coastline.  You can obtain more information on this from the Bureau of Oceans Energy Management (BOEM): https://www.boem.gov/national-program/

“From Maine to Florida the business community is overwhelmingly opposed to allowing offshore drilling for oil and gas anywhere in the Atlantic,” said Frank Knapp Jr., president and CEO of Business Alliance for Protecting the Atlantic Coast (BAPAC).  “Our supporters represent every facet of our local coastal economies.  They understand that our vibrant tourism, commercial fishing and recreation economies are dependent on a healthy ocean.”  Numerous Gullah/Geechee businesses are part of this 41,000 member business alliance that is standing together against this. 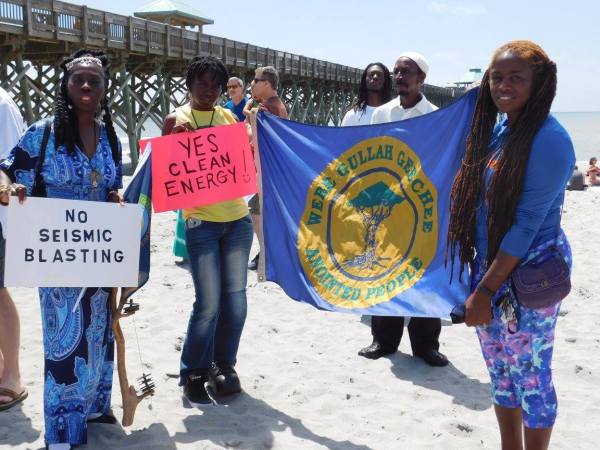 Please take the time today to write a letter or online comment expressing that you do NOT want any seismic guns used nor any oil exploration and drilling to be done in the Atlantic Ocean due to the fact that this would cause irreparable harm to the homeland and waterways of Gullah/Geechee people.  This will have negative impacts on the Gullah/Geechee fisheries as well as the quality of life on the Sea Islands.  Therefore, you stand in opposition to oil leasing in the Atlantic Ocean.  You can submit the comments and letters here: https://www.boem.gov/National-Program-Comment/  Please cc the letters to the Gullah/Geechee Sea Island Coalition at GullGeeCo@aol.com as well.