Wilmington on Fire Burns the Truth into the Minds of Many

The University of North Carolina Wilmington’s Department of Cultural Arts hosted a screening of the documentary, “Wilmington on Fire” which brings to the big screen the truth about what has been written of as the “Wilmington Race Riot of 1898.”   This film brings out why this coup d’état would be more appropriately referred to as the “Wilmington Massacre.”   The outstanding research that has been done by filmmaker, Christopher Everett and independent researcher, Kent Chatfield blazes the details of racial inequality and the long lasting negative impacts of terroristic acts that took place against numerous groups of people of African descent.  It highlights how these things are still having impacts on individuals today in towns such as Wilmington, NC which is in the northern most part of the Gullah/Geechee Nation. 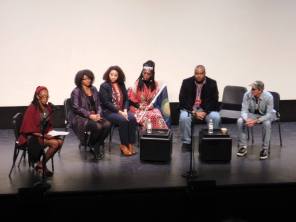 The documentary screening was followed by a panel discussion entitled “How Art Can Impact Social Justice.”  Tune in to the Gullah/Geechee TV (GGTV) coverage of dialogues with the researchers and the panelists:

The Gullah/Geechee Sea Island Coalition will host a screening of “Wilmington on Fire” at the St. Helena Branch Library as part of the “Gullah/Geechee Living History Series” at 6 pm on March 1, 2016.  Admission will be FREE.  A discussion with Queen Quet, Chieftess of the Gullah/Geechee Nation and Kent Chatfield who appears in the film along with filmmaker, Christopher Everett will follow the screening.