As listeners of Gullah/Geechee Riddim Radio and viewers of Gullah/Geechee TV (GGTV) are well aware, heirs property has been discussed on numerous episodes.   One such episode even focused on a book that heirs could obtain in order to begin to do a great deal of the background work that would be needed to protect their heirs property without going to an attorney to have it done.  The horrible fact is that last year, the author of this book took his own life after having lost his bar license and being found guilty of numerous charges that were affiliated with illegal actions he had taken in regard to the property of many Gullah/Geechee families.  We will never know if the writing and publishing of the book was something that he did as a tool to cleanse his conscience for what he was doing or if he did it as a lure to have families that use the book contact him for services.  In any case, we do know that the information forever remains in print and can be used to assist the families that are willing to work together to insure that they protect this family wealth generating asset for future generations.

Since the news of this man’s death, I have been contacted by everyone from the lawyers that had worked with him and were shocked to find out what had gone on to families that had been duped out of money and land or are tied up in court trying to get this undone given the circumstances that involve even the forgery of signatures on documents.  Although one lawyer is now gone, there are numerous lawyers that are of African descent and Anglo as well as destructioneers that are part of Gullah/Geechee families that are taking advantage of the next group of family members that are not aware of their land rights.  Many people have seen such characters on the national broadcast of Vice News from the Gullah/Geechee Nation:

This broadcast has opened the eyes of people around the world to the continued destructionment going on throughout the Gullah/Geechee Nation  which all began with the first gated area on Hilton Head Island and how that has now literally cleared the way to some natives of that island and their family members participating in the exploitation of their own people. This clearing of the way does not bring about clear title to the land though.  In fact, the clearing of titles and the process to protecting the ownership to heirs property has been cloudy to many for generations and is becoming more and more clouded as money based acculturated individuals of Gullah/Geechee and non-Gullah/Geechee descent come into the families and communities of communal “land rich and cash poor” Gullah/Geechees.   Such was the case with the Dennis Allen Family of Hilton Head that had one cousin begin an issue that threatened to have them lose the approximately 39 acres of prime real estate on the island that Mr. Allen had managed to amass as a young man in his thirties.
Dennis Allen acquired 33 acres of property in 1897 and added another 5 1/2 acres to his assets in 1906.  After over 100 years of continuous family ownership,  in 2009 one distant heir did not account for the generational wealth and family legacy and now wanted even those on the land to be moved if that was what it took for this relative to be paid off and bought out of their fractional interest.
Given the fact that there has been a consistent history of judges using an economics only test and not being able to assess the value to culture nor family when they deliberate on these issues and therefore they pass down decisions for forced partition sales, a number of Gullah/Geechee families have been displaced from their properties.   Numerous court cases involve the exact same scenario that the Allen Family found themselves having to battle since 2009.  To that end, the family formed the 4 Dennis Movement and started a petition to support the Uniform Partition of Heirs Property Act: http://www.thepetitionsite.com/takeaction/815/863/737/.
The Uniform Partition of Heirs Property Act has already passed in several states including Georgia here in the Gullah/Geechee Nation.  It was taken to the floor of the South Carolina General Assembly last year and got a majority vote of support in the house.  The senate has made some technical changes including to rename the bill for the Honorable Late Senator and Pastor Clementa Pinckney.   This now has the bill going back across the hall before it will be voted on and passed in SC.
Gullah/Geechee Riddim Radio had the honor of having the reporter (principal drafter) of the Uniform Partition of Heirs Property Act which was promulgated by the Uniform Law Commission in 2010 to be on the broadcast.  Professor of Law Thomas W. Mitchell has done an excellent job testifying before the South Carolina General Assembly and providing them with an education about the major points in the bill which would allow heirs property to be protected by
1) providing a buyout provision for the family members that do not want to sell the land.
2) providing a provision that would require that judges weigh the totality of the circumstances and evenly balance the economic factors as well as the cultural and historic value associated with the property.
3) replacing the “fire sale” manner in which forced partition sales have been carried out and insure that in this last resort case, the court would have to show that the family’s economic wealth would be increased by this sale which would have to be done on the open market with a court appointed real estate broker listing the property based on an appraisal.
I had the opportunity to extensively discuss this topic with Professor Mitchell who is only the second person of African descent to serve as a reporter for the ULC since it was founded 123 years ago.  You can tune in to learn more about him, the Uniform Partition of Heirs Property Act and about the 4 Dennis Movement from Allen Family members private equity marketing firm manager, Shamone Alle-Stephenson, plant manager, Jibrel Haneef, and Founder and CEO of Loving Arms Adult Day Services, Inc., Katrina Coleman on Gullah/Geechee Riddim Radio here:
http://www.blogtalkradio.com/gullahgeechee/2016/03/14/gullahgeechee-heirs-holdin-pun-de-land-hilton-head-island-and-beyond 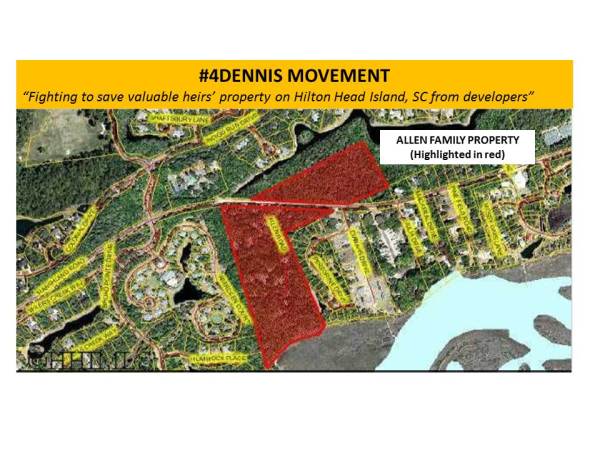 Fortunately, the Dennis Allen heirs are still living on their land which is abuts one of the many gated areas on the island.  Currently, the “For Sale” signs have been removed and the family is in the process of identifying all heirs in order to clear the title and form an LLC or a family land trust which are two of the tools that the Gullah/Geechee Sea Island Coalition has taught about during the numerous heirs property workshops that we have offered over the past 19 years.
The work that we have done to help protect Gullah/Geechee owned land and keep it in Gullah/Geechee hands we know is not in vain when we receive messages like this from families that are still holding on like the Allen Family:
“It is no secret that our family has been victimized.  We had some bad experiences with attorneys who misrepresented themselves and tried to rush the court into making a hasty decision as to the future of the property without identifying the heirs.  We choose not to dwell in these hurtful and damaging events, but to move forward and to become more proactive in protecting our land. It is this generation of Allen’s who will make a difference and will encourage unity and peace among our family. We will give back to the Gullah/Geechee community by standing up to protect our heritage.  We will work hard to educate others about heirs’ property and the resources available to create generational wealth for future generations.
Our land is priceless! It is impossible to put a numerical value on what it is worth due to the history and legacy which covers every inch of the soil. The 4DENNIS Movement focuses on the 3Ps: Protect, Preserve, and Prosper.
Protect: Heirs’ property is particularly vulnerable to exploitation and real estate developers.  The threat is ongoing as long as the property is classified as heirs’ property.
Preserve: For many families, heirs’ property is their most valuable asset. Once the land is sold – that is the point of no return.  A family’s history and legacy will be completely destroyed once the bulldozers arrive to make room for more condominiums, golf courses, and hotels.
Prosper: If there is an economic need for the family, there are options available other than selling (example: a partnership with the forestry division, agriculture via organic farming, etc.)”
I would add to this trinity of the letter P and place “Prayer” on the list because without it many families of the Gullah/Geechee Nation would not have been able to sustain ourselves over the centuries on the Sea Islands.  Continuing to stand in faith and unity as ONE Gullah/Geechee family will honor all of our ancestors and allow us to leave a rich inheritance to the next generation.
“A good person leaves an inheritance for their children’s children…”
• Proverbs 13:22a
by Queen Quet, Chieftess of the Gullah/Geechee Nation (www.QueenQuet.com) who is the Founder of the Gullah/Geechee Sea Island Coalition.  For 20 years, Queen Quet has gone around the world on the “Save the Sea Islands Tour” which is now the “Gullah/Geechee Land & Legacy World Tour.”   You can support this on-going effort by making a contribution at and becoming a dues paying member of the Gullah/Geechee Sea Island Coalition at www.gullahgeechee.biz or emailing GullGeeCo@aol.com for a membership form.

There was an error retrieving images from Instagram. An attempt will be remade in a few minutes.