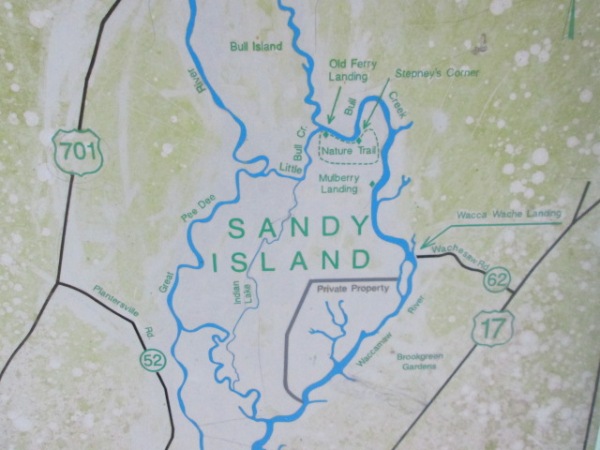 Sandy Island, SC consist of 9000 acres of land on which one can see 4 different Sea Island habitats.  Due to the vision of Mr. Washington who was a driver on the Carolina Gold rice plantations there, the Gullah/Geechees that descend from the island own approximately 250 acres of this property to this day.  The rest of the island is under numerous conservation easements and are part of the Waccamaw National Wildlife Refuge.

Like most of the Sea Islands of the Gullah/Geechee Nation, for many years Sandy Island did not appear on maps.  Those that live in Georgetown, SC have heard of the island due to going to school with the residents when they came across by boat to Pawley’s Island or other parts of the county.  However, many that currently reside in Myrtle Beach and Georgetown have never actually placed their feet in the literal sand that goes on for miles and miles in this unique place where bears that the Gullah/Geechees residents have never seen roam at night, where the foundations to the original Gullah/Geechee homes from one of the eight rice plantations sit amidst the oaks, and where foxes and wild boars walk along as the red-cockaded woodpeckers tap away amidst the long-leaf pine trees.

Many people in South Carolina only became familiar with the existence of Sandy Island when in 1996 (the same year that the Gullah/Geechee Sea Island Coalition was founded) a legal case began in order to prevent a bridge from being built to the island.  The bridge was going to be placed there so that a company could do logging, but the Gullah/Geechee residents would have only been “allowed” bridge use by appointment.  This continued strategy used by destructioneers to control the movement of native Gullah/Geechees had been used on Daufuskie Island, Sapelo Island, and other Sea Islands that Gullah/Geechees are transported to and from by boat and when the Gullah/Geechees do not agree with the terms, many times they end up displaced.  Fortunately, the uniting of several different groups to prevent this bridge from being built resulted in the island continuing to be environmentally preserved, but it unfortunately left the natives of the island to continue to have to navigate the waters on their own.   This led to another time when this island that is literally off the beaten path ended up in the news once again.  In February 2009, a Gullah/Geechee family drowned at sea as they tried to return with their groceries from the mainland.  Since that time, there has been an on-going fundraising effort to get a ferry to the island.  The South Carolina General Assembly voted to have the South Carolina Department of Transportation (SCDOT) to provide the ferry without actually appropriating funding.   As of Gullah/Geechee Nation Appreciation Week 2014, the Sandy Island community was $60,000 short of what they needed and this was requested from Georgetown County which receives the taxes of the Sandy Island residents.

As the Gullah/Geechees of Sandy Island wait for God to trouble the waters and bring the blessing to their shore so that they can continue to sustain their community and have more of their descendants return home to build houses and open businesses like the Pyatt family that greets you at the dock has done, the conservation community continues to educate people on the importance of having Sea Islands that are kept in a traditional Gullah/Geechee building pattern with maintained open space and wildlife habitat.

The US National Wildlife Refuge System Nature Trail on Sandy Island is a perfect place for hiking.

Tune in to Gullah/Geechee TV and see the environmental beauty of the island called “Sandy.”as Queen Quet, Chieftess of the Gullah/Geechee Nation takes a journey with the US National Wildlife Refuge staff to Sandy Island.