“Go Down Moses!” Harriet Tubman in the Gullah/Geechee Nation

by Queen Quet, Chieftess of the Gullah/Geechee Nation (www.QueenQuet.com)

Mother Moses aka Araminta Harriet Tubman Ross is someone that I have had a long term relationship with.  The first book that I ever took out of a library on my own when I was 5 years old (I had already been reading books on my own for a year at this point.) had her image on the cover which is what attracted me to the book.  I looked into her eyes and it seemed that she looked into my soul.  We were then attached from that point and I sought out more and more books about her from that time onward.

This meeting of the souls led to me being honored with awards bearing her name.  Each one had an image of her and I could again look in her eyes.  Between both of these awards that I received for embodying her spirit as a leader that sought to get “Black folks” to freedom, I continued to seek information on the Underground Railroad.  I had no idea that the tracks of it would lead me back home to Beaufort County, SC.  I came across documentation of Harriet Tubman living in the Town of Beaufort and serving in the Union Army at Port Royal Island, SC.  Harriet Tubman was a nurse and some listed her as a “spy.”  However, as I and others analyzed what she knew and what she was able to achieve, we actually found the title “scout” to be a true representation of this woman who had been written of as if she was only a legend to be taught to children.  She was a true soldier for her people and for God.  So, the name “Moses” was quite appropriate.

The sea parted around the Sea Islands where I grew up as Harriet Tubman arrived here.   On Feb. 19, 1863, Union General David Hunter provided her with passage aboard government naval vessels as he put his pen to the paper and wrote: “Pass the Bearer, Harriet Tubman, to Beaufort and back to this place, and wherever she wishes to go, and give her free passage at all times.”

This was presented to her one year after she told a friend: “God won’t let Master Lincoln beat the South until he does the right thing. Master Lincoln, he’s a great man, and I’m a poor Negro but this Negro can tell Master Lincoln how to save money and young men. He can do it by setting the Negroes free.”  Just as with many political things that have taken place over time, women will provide the inspiration and direction, but the politicians get the credit for the outcome.  (I know this one from personal experience for sure!)  So, as the celebrations and commemorations of 150 years since the Emancipation Proclamation were held, Lincoln was mentioned and even Frederick Douglass, but not Mother Moses.  Her words became part of the consciousness of Lincoln that led to people of African descent entering the ranks of the Union Army during the United States Civil War.  Tenk Gawd fa de poor Negro ooman!

Harriet Tubman’s richness came through her spirit.  Each account that I have read about her at some point comes to speak of the herbs that she used to heal which is no doubt why she was a nurse.   They each also speak of the songs that she sang.   When she took the journey on June 1, 1863 from Beaufort toward Colleton County, SC, she did not journey alone.  She went up the river with Union soliders of the 2nd SC Regiment and Colonel Montgomery.  General Hunter asked her if she would go with several gun-boats up the Combahee River in order to take up the torpedoes placed by the Confederates in the river, to destroy railroads and bridges, and to cut off supplies from the Confederates. She said she would go if Colonel Montgomery was to be appointed commander of the expedition. Colonel Montgomery was one of abolitionist John Brown’s men, and Harriet knew him well.  Colonel Montgomery was appointed to the command, and co-led with Harriet Tubman.

Given the written accounts of the day, she had to have God with her on board to even deal with the energy of the moment and the statements around her as the Anglo soldiers saw the massive amounts of Gullah/Geechees coming to the shoreline from the fields and woods along the Combahee River.  “When they got to the shore, they’d get in the rowboat, and they’d start for the gunboat; but the others would run and hold on so they couldn’t leave the shore. They wasn’t coming and they wouldn’t let any body else come.”  That’s when a white officer told Harriet to sing to “your people.” Harriet said she thought, “They wasn’t my people … because I didn’t know any more about them than de buckra did.” In spite of what she was thinking, she did begin to sing:

Of all the whole creation in the East or in the West,
The glorious Yankee nation is the greatest and the best.
Come along! Come along! don’t be alarmed,
Uncle Sam is rich enough to give you all a farm.

.  “Then they throwed up their hands and began to rejoice and shout, glory! And the rowboats would push off.”

This side of her was just like that of Moses in the Bible and his dealings with the messages from different sides about what he should do at a given moment.  At just the right time, God came through with what to do in all these cases.  In the same way, God came through to me to start to call the Beaufort Historical Society in the 1990s when I started uncovering more and more information about that which is now called the “Combahee Raid” and the bakery and laundry cooperative that Harriet Tubman was said to have run in Beaufort due to the fact that she did not get paid from the military.  I called on the people at the society to provide me with whatever documentation they had about her being in the town so that I could show people where her business had been located.  However, they asked me “Who is Harriet Tubman?”  This I could not believe!  I then had to start praying and singing and I never stopped reading.

I also started to be a part of the South Carolina History Day parade through the town and I would walk along with Nathaniel Heyward and Robert Smalls as I portrayed Harriet Tubman.  The parade would conclude at Beaufort Elementary School where we then taught the children who we each depicted and what these people that had lived in Beaufort had done in regard to American history.  I never wanted them to be unaware of who Harriet Tubman was-“What the children must know, you must teach them!”

Eventually, the Beaufort Museum took to investigating my claims and verifying the information to find that I was correct.  They then started to work on an exhibit to include her story.  Although we could not locate the address of her building where she lived or had a business, we could locate information that Colonel Montgomery wrote:

I have the honor to report that, in obedience to your orders, I proceeded up the Combahee River, on the steamers John Adams and Harriet A. Weed, with a detachment of three hundred (300) men of the Second South Carolina Volunteer Regiment and a section of the Third Rhode Island Battery, commanded by Captain Brayton. We ascended the river some twenty-five (25) miles, destroyed a pontoon bridge, together with a large amount of cotton, rice, and other property, and brought away seven hundred and twenty-seven slaves, and some fine horses. We had some sharp skirmishes, in all of which the men behaved splendidly. I hope to report more fully in a day or two.

Days turned into years before people would truly report the major role that Harriet Tubman played during the United States Civil War.   When I read about her, I had to tell her story.  The day we met and I looked into her eyes, I started telling her story.  She has been looking into my soul every since and I am sure that there are days that we sing together.  We sang as I finally drove from New York City to her home in Auburn, NY and saw the land and home that she saved up for and bought and where she spent her final years taking care of the elderly.  I met one of her descendants and spoke to her and it felt good to meet someone that shared her bloodline after all these years of being connected to Harriet’s spirit. 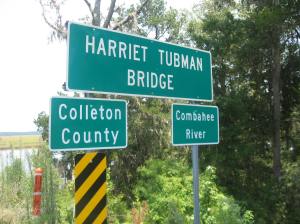 The day that the only bridge in the world dedicated to Harriet Tubman was dedicated over the Combahee River, I was there and many people awaited me coming to the microphone because they remembered the many years that I told her story when no one else would in my own hometown.  They remembered the plays that I wrote and presented to get the Underground Railroad story told.  Some even knew of my work consulting on what was the United States National Resource Study on Harriet Tubman (I got to do this due to my work in the effort to get the National Underground Railroad Network to Freedom established).  So, they hurt for me when I wasn’t even acknowledged on that day beyond community members coming to me to apologize for this clearly political exclusion.  What they didn’t know is that as cold as it was outside that day, when I walked to the water, I could feel the spirit of Mother Moses standing with me and warming my heart like her image did the first time I saw her.  It was as if she simply embraced me and I remember thinking, “I KNOW you KNOW how it feels to work to get folks to freedom and then have them just go on about their business like they never knew you existed!”  Unlike what she had thought on this river, I did pause briefly and think “These are supposed to be my people.”   What they didn’t know is that it did not take a podium for my celebration.  My celebration was going on within my soul as I am sure Harriet’s was when even 100 of the folks that she helped bring back to Beaufort from along the Combahee River signed up to serve in the Union as she knew that they would.  She knew that somebody in the group would help fight for freedom!

I celebrated Harriet Tubman’s spirit 150 years after the Combahee River Raid and I honored her with a libation.  I wanted her to know that there is still someone that will help fight for freedom!   I felt like I could now see her hold up her hands and shout!

I pray that Mother Moses’ soul is now resting somewhere along a peace filled river.  As I journey up and down the waterways of the Gullah/Geechee Nation, I will never forget the day I looked into her eyes and she looked into my soul.  It was like a reflection on the river.  Yes, the river of freedom that I will keep on traveling down with Moses!

During Black Music Month 2013, Queen Quet, Chieftess of the Gullah/Geechee Nation commemorated the Combahee River Raid and Harriet Tubman’s connects to the spirituals on “Gullah/Geechee Riddim Radio.”  Tune in the broadcast here: http://www.blogtalkradio.com/gullahgeechee/2013/06/03/black-music-month-moses-goes-to-the-gullahgeechee-nation